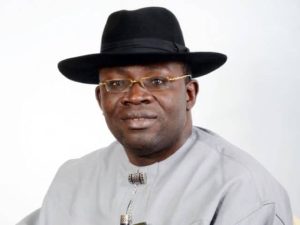 Naija news Understands that Dickson became victorious as he was given an automatic ticket t for the Bayelsa West Senatorial District election scheduled for October 31, 2020.

The stakeholders and top political players of the PDP from Bayelsa West decided not to pick the party’s nomination form for the senatorial district out of respect for the former governor.

The PDP chairman in the state, Chief Solomon Agwanana, said the people of the senatorial district were unanimous in the position that Dickson had the capacity, the pedigree and indeed the tested voice to provide the much needed effective representation at the Senate.

Agwanana said the people had implicit confidence in the capacity of the former governor to exploit his vast experience and potential in the interest of the senatorial district, the state and the entire Ijaw Nation.

While Bayelsa Central has five aspirants jostling for the PDP ticket, the West has only Dickson whose ticket was procured for him by a coalition of stakeholders

He stressed that Dickson had a track record in the National Assembly as a former member of the House of Representatives aside from his sterling performance as the first ever two-term Governor of Bayelsa State.

He reiterated that stakeholders of other political parties in the senatorial district should come on board to join the popular preference for Dickson as the next senator for Bayelsa West.