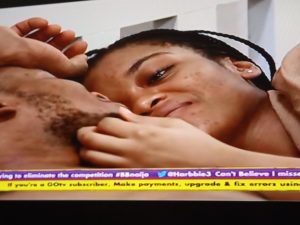 The 2020 edition of the Big Brother Naija reality TV show kicked off on Sunday with 20 housemates competing for the N85m grand prize.

As the housemates settle down, some of them have started taking a liking to one another, something that is quite familiar in the Big Brother Naija reality show set up.

Eric and Lilo are two of the housemates in the on-going season five of the reality show and fans have noticed what seems like a spark of love between the two housemates.

However, the housemates appear to be taking things slow, a situation that is leaving many of their fans as well as followers of the show with so much anxiety.

Some comments on social media have even mockingly suggested that maybe the two housemates are waiting for approval from Biggie before they begin a relationship.

Most of the comments seen on social media by Naija News point to the fact that fans of the show want to see a relationship blossom between the two housemates.

Check out some of their comments:

Assuming Eric kissed Lilo, this same people feeling disappointed will still be the ones who would lead Eric’s assassination on Twitter. #BBNaijia

#BBNaijia
Kiss each other or go to jail

Eric and Lilo are this close to kissing

. They should stop this suspense

Eric and lilo’s love is powered and sponsored by Zee world …. suspense

how on Earth will you be this close and kiss at least no go shele #BBNaijia pic.twitter.com/BIjwCGs1XO

Lilo and Eric should do this thing nah

! Enough of the suspense

You all want Lilo and Eric to kiss so satisfy your sexual cravings, but you’d be the one to first slut shame Lilo for kiss a guy when she has a BF outside.
Hypocrites everywhere.
#BBNaija

“Kiss Lilo or go to jail”

I think Eric is waiting for big brother to say
“This is big brother Eric and Lilo kiss each other”. #BBNaijia pic.twitter.com/RIcqWrZZ64

Lilo boyfriend when her and Eric finally kiss #BBNaija pic.twitter.com/hvGEJqIuv7

Whose else is expecting lilo and Eric to kiss today
Who is dulling the moment ?
Retweet for Eric
Like for lilo#BBNaijia #bbnaijalockdown2020 #bbnaija2020 pic.twitter.com/S0oVda1uUW