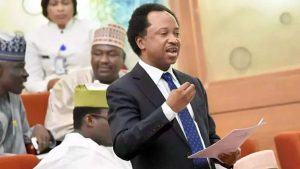 Shehu Sani, a former Senator representing Kaduna Central in the National Assembly, has called for the protection of Governor Babagana Zulum of Borno State.

In a post on his Twitter page, Shehu Sani also the government should listen to the Borno governor.

Zulum should be listened to and adequately protected.

Naija News recalls that reports that gunmen suspected to be members of the dreaded Boko Haram sect on Wednesday attacked the convoy of Babagana Zulum in Baga Town.

The governor was reportedly on his way to visit some Internally Displaced Persons (IDP) camps in the northern part of Borno when his convoy was attacked.

The attack happened near Monguno while en route to distribute food to displaced residents. Monguno and Baga axis of Borno has been totally cut off from mobile phone services.

Nobody was injured during the attack and the governor safely returned to Maiduguri the state capital.

Reacting after the attack, Governor Zulum disclosed that saboteurs in the system have been frustration President Muhammadu Buhari’s effort to wipe out Boko Haram.

He said this on Sunday when hosting the Governors of Kebbi and Jigawa States, Atiku Bagudu and Badaru Abubakar, who paid him a solidarity visit over the recent attack in Baga – a town in Borno.

Speaking at the meeting, Zulum said there is sabotage in the system that will not allow Boko Haram insurgency to end in the North East.

He said, “Let me also re-echo my previous position with respect to the level of insurgency in Borno State, I earlier said that the gravity of the insurgency cannot be compared with what has happened between 2011 to 2015, and 2015 to date. Yes, it’s true. The President has done well.

“But there’s sabotage in the system that will not allow insurgency to end; the President has to know this very important point.

“When he came to Maiduguri two months ago, I said so because between 2011 to 2015, at a time, almost about 22 LGAs were under the insurgents.

“Out of the four main roads that lead to Maiduguri. only one was functional.”