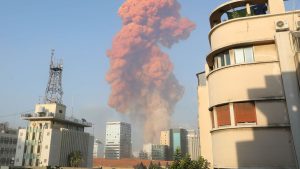 A massive explosion on Tuesday evening rocked Beirut, the capital of Lebanon.

Footage from the ground showed significant damage and plumes of smoke rising above the city.

Two explosions occurred in Beirut’s port, potentially injuring dozens, according to the AFP.

Firefighters were seen battling flames at the scene of the blast and it is not yet known what caused the explosions.

Ghada Alsharif, a reporter from the Daily Star, one of Lebanon’s most prominent news outlets, posted a video on social media showing significant damage within the newspaper’s office building.

My thoughts and prayers to all those affected.

That explosion in #Beirut is one of the most horrifying things I’ve ever seen.