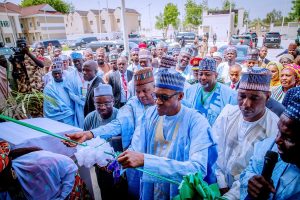 The NDDC made this known in a statement signed by it’s Director of Corporate Affairs, Charles Odili, in Abuja, titled: ‘NDDC Invites President Buhari To Commission Signature Project’.

According to the commission, the project, which cuts across 14 other communities, costs N24 billion.

The road would serve as a land link between Yenagoa to the ancient city of Nembe for the first time.

Odili said the road was built in conjunction with the Shell Petroleum Development Company.

Odili said, “To conquer the swampy terrain, the construction involved digging out four metres of clay soil and sand filling it to provide a base for the road.

“The road has cut the journey time to Yenagoa, the Bayelsa State capital, from three hours to one and a half hours.

“This project is a not only flagship of intervention in the Niger Delta, but it is also a model of the development partnership between the Commission and international oil companies in the region.”

Naija News reports that the NDDC is currently under investigation by the National Assembly over the mismanagement of funds.