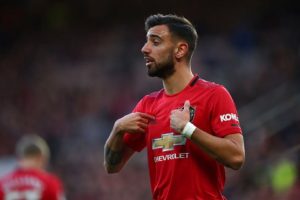 Manchester United midfielder, Bruno Fernandes has been tipped by one of his former managers, Andrea Stramaccioni, to become Red Devils captain in the future.

Fernandes upon his arrival at Old Trafford has become a fans’ favourite since he joined the Red Devils in January 2020.

The Portugal playmaker finished the season with 12 goals in 22 appearances in all competitions.

He was the captain of Sporting Lisbon in his final seasons at the club, and Stramaccioni who worked with him at Udinese, stated that he has what it takes to United’s captain.

He told Sky Sports: “He can certainly captain Manchester United. He is a really talismanic player. He is loved by the fans, respected by his teammates even from opponents.”

“I think now we don’t need to think about this kind of thing, he has to think about keeping his performance at a high level, as he is doing, and step by step gain the respect of everyone around him the media, the fans and continue to keep a high level.”