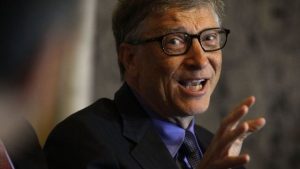 The founder of Microsoft, Bill Gates, has debunked the claims that he has hand in the creation of Coronavirus, which has led to the death of many all over the world.

There had been speculations that the billionaire created the virus to reduce the population of the world.

Some clerics in Nigeria have called out the businessman over the increase in case, most recent is the founder of the Household of God Church, Pastor Chris Okotie, who noted that the aim of COVID-19 is to reduce the population of the world.

The cleric further stated that Gate is leading the conspiracy to destabilize the global economy and carry out a “satanic agenda” against the church.

He had said, “There’s a man who is the protagonist of this whole process that we’re seeing today. His name is Bill Gates.”

Gates, however, while speaking on CNN on Thursday said, “It’s a bad combination of pandemic and social media and people looking for a very simple explanation.”

The business mogul noted his foundation has provided more funds to buy vaccines to save lives around the world than any other.

“So you just turn that around. You say, ok, we’re making money and we’re trying to kill people with vaccines or by inventing something,” he added.

“And at least it’s true, we’re associated with vaccines, but you actually have sort of flipped the connection.”

Bill Gates lamented that the wide-spreading conspiracies may generate to “vaccine hesitancy.”