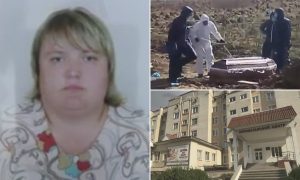 A new mum who contracted COVID-19 died just hours after giving birth to her daughter.

Naija News learnt that Galina, who had underlying health conditions, died after she started having trouble breathing and developed pneumonia, according to a spokesman for the medical centre in Ivano-Frankivsk, Ukraine.

She was admitted to the centre on March 10 when she had no sign of the virus, local media reported, but fell severely ill after a 19-day stay at the unit.

That evening, Galina gave birth to her daughter who weighed 2.5kg (5.5lbs).After that, mum’s condition became critical. Galina’s family believe she contracted coronavirus at the hospital She was rushed in the intensive care unit and placed on a ventilator.

Devastated relative Oksana Stasevich said: “We were told that she was dying.”They allowed us to enter her ward and say goodbye to her.”Galina died hours after giving birth to her child.”

Mrs Stasevich believes Galina contracted coronavirus at the health facility and blames its staff for the new mother’s death.

She told: “Galina was in a ward with two other women who had fever.”They shared the room for several days before the ill women were isolated.”A doctor from this hospital told me they had confirmed coronavirus cases among staff about three weeks ago.”Medics do not have any protective gear there. One doctor didn’t even wear a medical mask. “I am 100 per cent sure that Galina was infected at the hospital.”