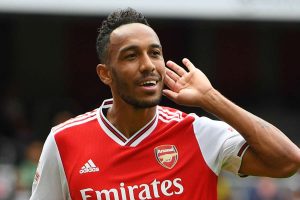 According to The Times, the North London side have repackaged their contract offer to Aubameyang and are now prepared to pay him £300,000-a-week to remain at Emirates.

The Gabonese international will be paid £300,000-a-week including bonus payments in his proposed new contract.

He is receiving £200,000-a-week base on his current contract which is about to end.

He will also receive a one-off payment of £300,000 due to a clause in his current contract requiring him to score or assist at least 25 goals, a benchmark he reached in the Premier League on the final day of the season against Watford.

The deal would make the club captain the second-highest earner at the club behind Mesut Ozil, though the club is concerning offloading the midfielder during the transfer window.

Recall that Aubameyang fired Arsenal to their 14th FA Cup trophy last Saturday with a 2-1 victory over Chelsea and the club manager, Mikel Arteta hope the victory will make the striker reconsider his deal with the club.

The 31-year-old’s current contract at Arsenal is in its final year.