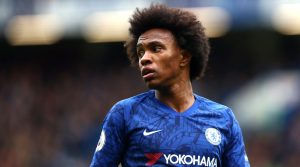 Chelsea forward, Willian may be on his way out of Stamford Bridge after rejecting the club’s latest offer to sign a new two-year contract.

According to UK Guardian, the Brazilian has met with London rival, Arsenal to discuss terms of condition.

A further report revealed that the Gunners are ready to meet the demands of Willian for a three-year deal.

The North London side was reportedly ready to offer Willian a £250,000-a-week contract before the COVID-19 pandemic struck.

The winger is keen on joining the Mikel Arteta side as he is settled in the capital with his family.

The 31-year-old is increasingly likely to leave after the second leg of the last-16 Champions League tie against Bayern Munich on Saturday.

Meanwhile, Willian is expected to delay a decision on his future until after that game, Arsenal is optimistic of signing the player.

Chelsea has already strengthened their forward line with the signings of Timo Werner and Hakim Ziyech and remain in talks with Bayer Leverkusen over Kai Havertz.