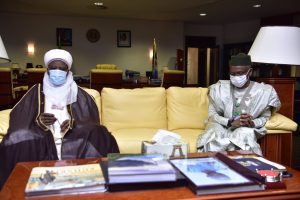 The details of the closed-door meeting between Governor El-Rufai and the Sultan has emerged.

Governor El-Rufai while speaking with newsmen after the meeting said, he is happy with the peace being brokered in Southern Kaduna by the Chief of Atyap, Dominic Gambo Yahaya.

“All humans are equal before our creator so your neighbour should be considered as your blood relation . Both Islam and Christianity teach us to love for others what we love for ourselves.

‘’Therefore, we are happy with what the Chief of Atyap started, may God reward him for inviting all the ethnic groups under his chiefdom and agreed to live in peace and harmony,’’ he said.

The Kaduna State Governor appreciated the Sultan for paying him a courtesy visist at Government House, Kaduna and to share ideas with his government on how to end the killings in the state.

He added that the Sultan came to express support for the measures taken to promote peace in Kaduna State.