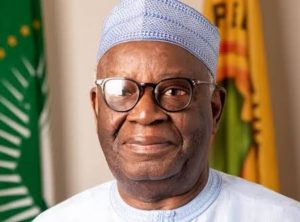 The Presidency on Sunday noted that President Muhammadu Buhari’s chief of staff, Ibrahim Gambari, has no plans to interfere in the governorship election in Edo State.

This is coming after the former National Chairman of the All Progressives Congress, Adams Oshiomhole met with the COS at the Presidential Villa, Abuja.

There were reports that the duo planned to arrest some Peoples Democratic Party stakeholders in the state.

Recall that the Peoples Democratic Party (PDP) had interpreted the video of Oshiomhole and Gambari where the former party boss spoke of “arrests” and “dealing with” some unknown individuals as a plot to arrest opposition members, clergymen and other stakeholders in Edo State.

PDP in its statement has called on the international community to take note and also cancel the travel visas of both Oshiomhole and Gambari.

A top presidency source, while reacting to the development said those dragging the Chief of Staff into Edo politics are wasting their time because as an accomplished diplomat, he would do no such thing.

The Presidency source wondered how the PDP could have been so sure that the “arrest” mentioned in the discussion referred to their party members.

The source stated: “What PDP is doing is called ‘playing the devil’s card’, which is all about suggesting ideas into people’s heads, the truth does not matter in such an atmosphere.”

“What I am convinced of is that even the leaders of the PDP know what they are doing is wicked and unethical; but since it is politics, they believe anything goes.”

“How do you know the ‘arrest’ in the conversation is for PDP elements? The target in this mudslinging is the Chief of Staff to the President, but their mistake is that this is not a man for this sort of politics.

“He’s way above petty politicking. He’s a career diplomat and hardly interested in this kind of politics, those who know him, know this much about him.”