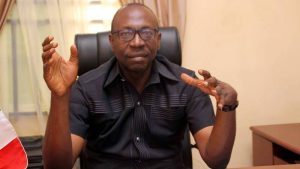 The Governorship candidate of the All Progressives Congress in Edo State, Osagie Ize-Iyamu, has promised the people of the state that his government will thuggery in the state.

Ize-Iyamu noted that the move will be ended through the creation of jobs and rehabilitation of young persons without skills and education for proper reintegration into society.

The APC governorship candidate noted that the issue of thuggery could be solved with adequate rehabilitation and provision of legitimate jobs and engagement.

He said, “I don’t support thuggery and the oppression of our people; only government officials wearing uniforms will be permitted to collect taxes when voted into office.”

“We must look for jobs for the thugs in the motor parks and markets. You cannot solve one problem and create another problem in the long run.”