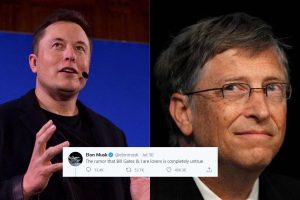 Following the recent exchange between SpaceX Chief Executive Officer, Elon Musk,  and the Microsoft co-founder, Bill Gates on COVID-19, the former has mocked the later, saying they arent lovers.

The duo are lashing out at each other over differing stances on the COVID-19 pandemic.

Gates had advise that Musk to focus on cars and rockets, and stop speaking in matters out of his field or he has no knowledge of.

Reacting yesterday, Musk tweeted: “The rumor that Bill Gates & I are lovers is completely untrue.”

Earlier, Musk spoke against some of the restrictions put in place by governments, tagging the California’s stay-at-home order “fascist”.

Musk said there are a ridiculous number of false positive COVID-19 tests, in some cases, 50%.

He tweeted: “False positives scale linearly with number of tests. This is a big part of why COVID-19 positive tests are going up while hospitalizations and mortality are declining. Anyone who tests positive should retest.”

Speaking to CNBC, Gates stated that Elon’s positioning “is to maintain a high level of outrageous comments. He’s not much involved in vaccines. He makes a great electric car. And his rockets work well. So he’s allowed to say these things. I hope that he doesn’t confuse areas he’s not involved in too much.”