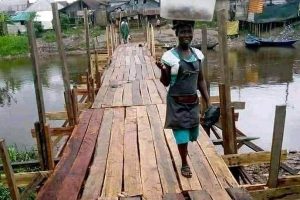 Claim: NDDC constructs a wooden bridge at the cost of N2.3bn

A picture of a wooden bridge said to have been constructed by the Niger Delta Development Commission (NDDC) at the cost of N2.3 billion naira has gone viral on the internet.

The images had been used on several websites and blogs with captions such as “Check Out The N2.3billion Bridge in Bayelsa Built By The NDDC (Photos)” as well as on many social media pages.

Another website has it as “Nigeria: NDDC Builds A Wooden Bridge In Bayelsa Claims It Was For N2.3Billion | PHOTOS” with all of them displaying images of the bridge purportedly built by the NDDC under the leadership of Daniel Pondei.

It will be recalled that the activities of the NDDC are currently been investigated as the government agency has become a target of public scrutiny over suspicion of massive fraudulent activities ongoing by its officials.

A forensic audit of the commission’s affairs has also been ordered by President Muhammadu Buhari while the Minister of Niger Delta Affairs, Godswill Akpabio is been questioned by the National Assembly.

Naija News carried out some independent verification of the said wooden bridge project and also obtained an official statement from the Niger Delta Development Commission (NDDC).

The community had to resort to self-help since response and assistance from the government was taking ‘forever’ to come.

The statement made available by the NDDC Director, Corporate Affairs, Charles Odili, said: “We have gone through our records for past 18 years and there is even no contract offer for the construction of a bridge in the community.

“Elebele community in 2018 sought assistance of the Commission to rebuild the bridge which had collapsed.

“The proposal is still going through our system and presently at the design stage.

“While awaiting NDDC’s intervention, the community undertook self-help and built the wooden bridge. No NDDC input.

“NDDC has not paid out any money for it. In clear terms, this bridge has nothing to do with NDDC.”

Odili added that: “the fake photograph is a follow up to false allegations and campaigns launched by detractors in news and social media space, even at the recent public hearing by the National Assembly. These forces are not from the Niger Delta.”

The wooden bridge actually exists in the community as displayed in the pictures. However, the project was carried out by the community through self-help efforts which didn’t include the NDDC neither was the sum of N2.3bn expended on the construction of the bridge.