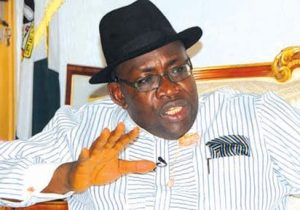 Former Bayelsa State Governor, Seriake Dickson may soon join the league of former governors who have become legislators after completing their tenures.

This is as the former governor disclosed on Monday that the Peoples Democratic Party (PDP) has picked him as the sole candidate for the Bayelsa West senatorial district election.

Dickson added that he felt honoured that the party decided against conducting any primary election, but picked him as their sole candidate.

He made the disclosures in a series of tweets from his handle on Monday where he also called on the Independent National Electoral Commission (INEC) and the federal government to ensure a free and fair election.

“I want to express my sincere gratitude to the different political groups, leaders and other stakeholders who bought the PDP Bayelsa West Senatorial nomination of interest form for me.”

“The form has already been signed by me and returned by representatives of these groups. Screening has commenced today and I have already interacted with the panel.”

“I have also been in contact with the party leadership and I want to use this opportunity to thank His Excellency, Governor Douye Diri, for inaugurating the Campaign Council.”

“I will be in touch with them to let them know when I will be on ground to make a formal declaration.”

“I thank all members of the PDP for according me that respect of not having a contest at the primaries but as they know, we have to keep working until everything is over.”

“Thanks, once again to elders, traditional leaders, youths, women and other political groups who for several months have been gathering support and endorsements for me. I hope to connect and appreciate them personally when I come home.”

“I also thank those who bought the nomination of interest form for me and the leadership of the PDP. God shall see us through and victory shall be ours.”

Naija News recalls the Bayelsa West senatorial seat is currently vacant following the emergence of Senator Lawrence Ewhrudjakpo as the deputy governor of the state after a Supreme Court order gave victory to Senator Duoye Diri and the PDP in the 2019 Bayelsa governorship polls.