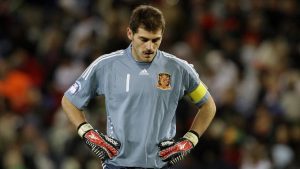 Former Real Madrid and Spain goalkeeper, Ike Casillas, has officially retired from football at the age of 39.

In a post on his Twitter page on Tuesday, Casillas wrote: “The most important thing is the path you travel and the people who accompany you, not the destination that it takes you.

“I think I can say, without hesitation, that this has been the right path and the dream destination. Thanks.”

The 39-year-old, who holds the record for most Champions League clean sheets and most clean sheets for the Spain national team, has spent the last five years playing for Porto after a 25-year spell with Real.

Recall that the former Madrid goalie had suffered a heart attack during his spell with Porto.