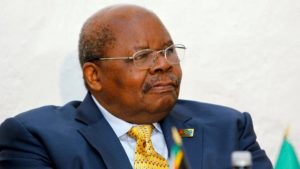 The incumbent President of Tanzania, John Magufuli has announced the death of Benjamin Mkapa, the former president of the country.

The president disclosed the development on Friday morning during a short televised speech, Naija News understands.

It was reported that Mkpa who happens to be the third president of the country died at the age of 81 at the Dar es Salaam hospital, though the cause of his death is yet to be announced.

“I’m saddened by the death of the third president of Tanzania and that is a big loss for us as a country,” said President Magufuli.

The president requested from citizens word of prayer over the deceased as he noted that more details regarding his death will be revealed later. He said, “Let’s pray for him and more information will follow later,”

According to his statement, seven days of mourning will be declared in Tanzania in honour of the late ex-president.

Naija News understands that Mkapa had ruled the country between 1995 to 2005 as the third president after Tanzania’s independence from Britain in 1962.

This is coming barely a year after Zimbabwe former President, Robert Mugabe, who led the country from 1980 to 2017, died at the age of 95, head of state Emmerson Mnangagwa announced on Friday.