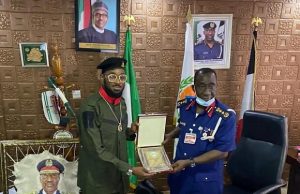 The Agro-Rangers programme was inaugurated in mid-2016 to forestall attacks on farms, boost farmers’ confidence to work on their farms without fear and to enhance FG’s food security plan.

In a statement by his Corporate Manager, Mr Damien Okoroafor, D’Banj, said having farmed for over 15 years, he understands the challenges suffered by farmers.

The popular musician noted that the incessant and re-occurring attacks stifle production and productivity.

He commended the Federal Government for its Agro-Rangers initiative undertaken by the NSCDC.

D’banj said: “I find this initiative undertaken by the Nigerian Security and Civil Defence Corps as a wonderful opportunity to serve my country.

“Organisations or agencies such as the NSCDC need the support of the general public to do so effectively since they were established to protect Nigerian citizens.

“Being myself a farmer of over 15 years, I very well understands the challenges suffered by farmers as incessant and re-occurring attacks stifle production and productivity.”

Also speaking, NSCDC boss disclosed that the Agro-Rangers initiatives was part of President Muhammadu Buhari’s strategy to protect lives and property of farmers, create jobs as well as guarantee food security in the country.