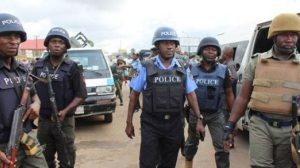 A supposed peaceful protest by Youths in Ozoro, a community in Delta state on Monday, August 3 has turned sour after one of the protesters was reportedly shot dead.

According to reports, the resident youths had staged the protest to decry the spate of harassment by officers of the Nigeria Police Force (NPF) in the community.

Unfortunately, the protest reportedly turned violent as a police officer while trying to disperse the protesters, fired a shot, and mistakenly hit one of the protesting youth, resulting in his death.

Reacting to the unforeseen incident, the spokesperson of the state police command, Onome Onovwakpoyeya, in a telephone interview with newsmen confirmed that the command is currently investigating the uncalled incident and promised to give more details later.

Meanwhile, Naija News reports in May 2020 that a woman was arrested in Oyo State for allegedly slapping a police officer 13 times

The Nigerian Police Force Public Relations Officer, DCP Frank Mba, in a statement following the incident, explained that no less than twenty-seven (27) officers of the force have been humiliated and attacked by the general public during the COVID-19 lockdown.

According to Mba, some of the officers who were assaulted in a different location are still receiving care in the hospitals due to the kind of injury inflicted on them.

He, however, confirmed that the woman who appeared in the viral video assaulting an officer of the Police Force has been arrested.