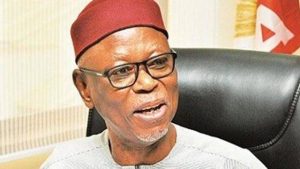 The spokesperson of the Edo State chapter of the Peoples Democratic Party, Chris Nehikhare, on Tuesday noted that the refusal of the former National Chairman of the All Progressives Congress, John Odigie Oyegun to endorse his party’s candidate, Osagie Ize-Iyamu, is an addition for Governor Godwin Obaseki.

Nehikhare during an interview with Punch, on Tuesday noted that the action of the elder statesman spoke volumes.

Nehikhare said “A man of Odigie-Oyegun’s status not endorsing his party’s candidate tells you a lot about the candidate APC has. Edo people are happy with Governor Obaseki his achievements, his style and his sense of purpose.”

Earlier while speaking to reporters, the PDP spokesman said, “The efforts so far put in place by the Buhari-led government to ensure the security and safety of Edo people, before, during and after the election, deserve commendation.”

“With the massive deployment of men of the Nigeria Police Force, the Military, Nigeria Security and Civil Defense Corps and other security agencies to Edo State to supervise Saturday’s election, we are confident that the election will be crisis-free.”