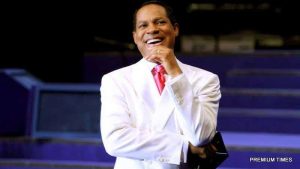 Pastor Chris Oyakhilome, the founder of Chris Embassy, has berated President Muhammadu Buhari and other Africa leaders for embarking on foreign medical trips.

Naija News reports that Buhari and some African leaders had on several occasions travelled abroad to seek medication when they were sick.

President Buhari had spent over 100 days in the United Kingdom, which led to massive protest in Nigeria.

Speaking in a broadcast to his members on Sunday, Pastor Oyakhilome said it was a shame African leaders go abroad.

According to the popular cleric, it was a shame Africa can’t produce its own vaccines to diseases and have to rely on help from foreign countries.

“Why can’t Africa be allowed to produce their medication? How many years do you need somebody to help you. For how long can you be waiting? It will be a shame at this time of your life and history if vaccines have to be imported to Africa to help Africa,” Oyakhilome said.

“It is a shame that leaders of Africa still have to travel to Europe and America to get medication when they get sick. You should be ashamed. At this time of your life, you should have grown up, What are all the universities you have built, what are they for? It is about time you started thinking.”

Pastor Oyakhilome lamented African countries dependence on other countries for loans and others when they have enough.

”When will Africa put away childish things, Africa is old enough. Any nation in Africa that is still calling for help from another country, the leadership is a shame. You have more than enough resources to help your country. Why are you borrowing money from nations that don’t have it? Europe don’t have enough resources to borrow you money, neither does China, They are only borrowing you money they got from you, wake up,” he said.