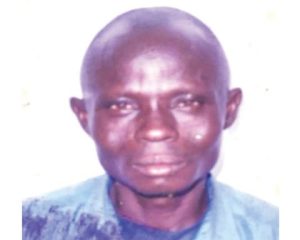 House owners and residents of Oluwatedo community, Ogere, in the Ikenne Local Government Area of Ogun State, have started deserting their residence following the continuous looking of people in the area by suspected Serial killer identified as Feyisola Dosumu, also known as, Spartan.

According to Punch, Elder Olatunji Oladeji, a community leader was his latest victim.

Information gathered revealed that the 53-year-old victim was said to be the Vice-Chairman of the Oluwatedo Community Development Association.

The son of the deceased identified as Samuel noted that his father had been living in the area for 30 years before he was killed on Friday, August 21, 2020.

He lamented that Dosumu butchered his father in the head and fled the scene.

Samuel stated, “My dad was returning from work and was about to enter the house when this man confronted him and hacked him to death. He butchered my father as if he were an animal. That was around 7.30pm. There was no disagreement between them. People saw him, but could not go near him.”

“He has killed a lot of people in this community. Whenever he kills anyone and people go after him, he marks the faces of his pursuers and goes to kill them in their houses.”

“About a month ago, he killed a nursing mother, Mummy Seun. He raped the woman and hacked her to death with a cutlass. My father and I carried the woman’s corpse from a mortuary to the place of burial. But my father did not say anything to warrant this senseless killing.”

Samuel noted that he is ready to desert the community, he lamented that many landlords had been deserting their houses because of the suspect.

“Nobody can sleep with their two eyes closed again. He has turned this place to a horror community. The blood of many innocent people has been spilled,” he added.

A landlord, who spoke on condition of anonymity, said the suspect had allegedly killed 15 residents since February 2020.

He alleged that Dosumu only went after settlers.

“He is an indigene of Ogere, but nobody knows where he lives. Once he kills anyone, he will run away. The Ogun State Commissioner of Police, Edward Ajogun, and the Area Commander visited one month ago after he killed a nursing mother and another person. They promised to do something about him. In fact, it was Elder Olatunji, who addressed the CP and pleaded for help. But four days after the visit, everybody left and the man resumed the killing.”

“We are tired. Whatever the government can do, they should do it before he finishes everybody.”

Apart from Ogere, the suspect had allegedly been terrorising residents of Iperu, the hometown of the state governor, Dapo Abidoun.

The suspect, alleged to be a notorious cultist, graduated from a polytechnic in Abeokuta.

He was said to have been admitted to the Neuropsychiatric Hospital, Aro, Abeokuta, for treatment after he developed a mental problem.

Dosumu, however, escaped back to Ogere remains elusive to local vigilantes and security agents, and the police have declared him wanted.

The state Police Public Relations Officer, Abimbola Oyeyemi, confirmed the incident, adding that the police would soon get the suspect.

“We are seriously on his trial and any moment from now, we are going to get him. We have about five of our tactical teams in that place now looking for him. We will get him,” Oyeyemi stated.