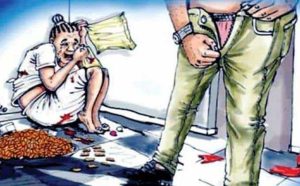 A 28-year-old Igbo man, Nduka Anyanwu, presently in police custody for allegedly impregnating two siblings in Lagos State has explained his side of the story.

According to police personnel involved in the investigation of the matter, the young man confessed that he committed the act with the knowledge of the young girls’ father.

The security personnel who belongs to the Ikotun police division disclosed that the suspect had been sleeping with the girls, 13 and 17 years old since they were in primary school. He further told newsmen that Anyanwu claimed he engaged in the act with their father’s knowledge.

According to Anyawu, Mr. Christian Onyechi, father of the young girls gave him a green light to have sexual intercourse with his children. However, Naija News understands that the culprit has been arrested on Monday, August 3, following pressures from the mother of the young girls who demanded a pregnancy test on her children after noticing some strange symptoms.

The report also has it that police have arrested Mr Onyechi for giving consent to the violation of his children. However, no comment has so far been made by the Lagos State Police Public Relations Officer, Bala Elkana, as he did not did respond to calls made by reporters as at the time the incident was unveiled.

In another news, the traditional ruler of Obor community in Awara, Oguta Local Government Area of Imo State, Eze Andrew Okuegbunuwa, and a cleric identified as Caleb Agu, has been arrested by Operatives of the Anti-Kidnapping Unit and the Special Anti-Robbery Squad of the Imo State Police Command for alleged kidnapping, Naija News reports.