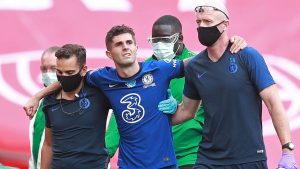 Naija News reports that the injuries of the two players which is a major setback ahead of Last 16 return leg, was confirmed by Chelsea legend and club manager Frank Lampard.

This online news platform recalls that forward Pulisic and full-back Azpilicueta limped out of Chelsea’s 2-1 defeat by Arsenal in the FA Cup final on Saturday. Chelsea will visit German champions Bayern Munich on 8 August, trailing 3-0 from the first leg of their last-16 tie.

“I don’t know the full extent of the injuries,” Lampard told reporters in his post-match press conference. “But I know the hamstrings with Azpi and Christian – they have to be scanned and assessed over the next few days. They clearly won’t be fit for next week.”