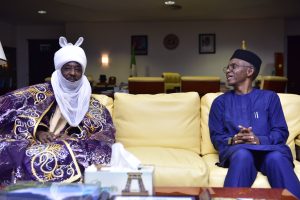 The dethroned Emir of Kano, Sanusi Lamido Sanusi on Sunday, arrived Kaduna State more than five months after he was removed from the throne by Governor Abdullahi Ganduje.

Naija News recalls Sanusi was dethroned by the Kano State government on March 9, 2020, over allegations of disobedience to constituted authorities and abuse of office.

The former Emir was however warmly received by thousands of residents who stormed the Air Force base in Kaduna to welcome him on Sunday morning as earlier reported by this online medium.

It is understood that Sanusi, who is also a former governor of the Central Bank of Nigeria (CBN) last visited Kaduna during the 60th birthday celebration of Governor Nasir Ahmad El-Rufai.

The ousted Emir later visited the Kaduna governor whom he described as a friend who always shows up when needed.

The former CBN governor stated that he had made up his mind that once he leaves Lagos State, the Governor will be the first person he will visit to thank him for his friendship and service to the nation at large.

According to further information obtained by this reporter from the official twitter handle of the Kaduna State government, which was also retweeted by Gov El-Rufai himself, Sanusi told the Governor “that he is grateful to have in him a friend he can always count on. He thanked the governor for standing by him and assured that he will do his best as Vice Chairman of @InvestKaduna and Chancellor of the Kaduna State University, KASU.”

“The world knows that whenever I am in need of friends, you are the first one to show up” -HRH Muhammadu Sanusi to Malam Nasir @elrufai pic.twitter.com/FNVz1jgF9H